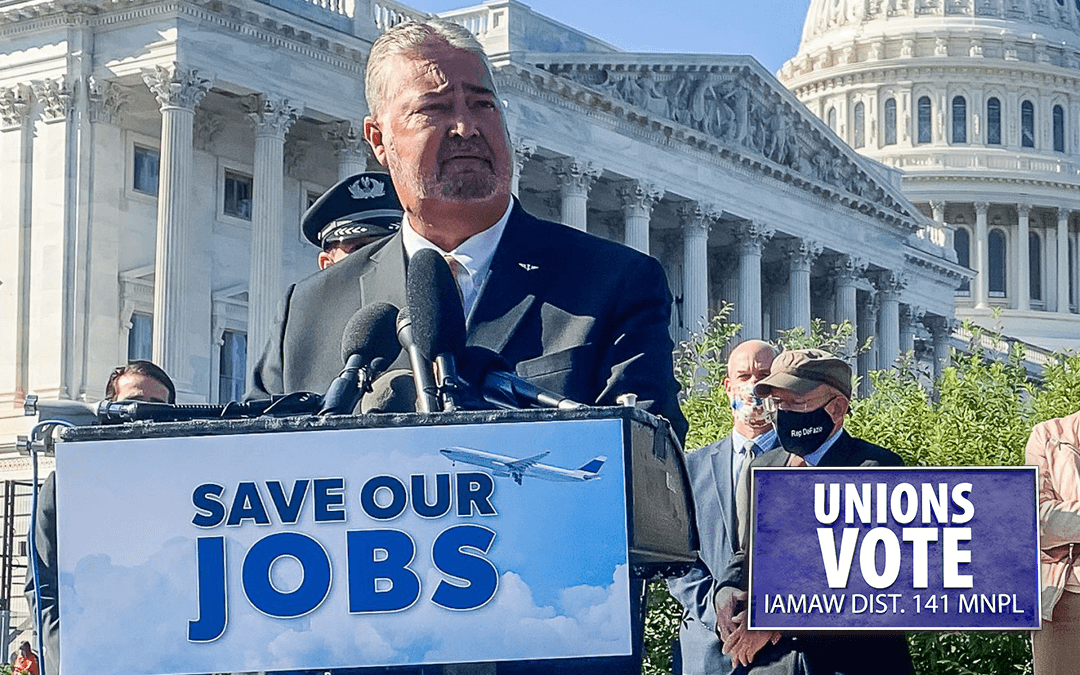 UPDATE 9/23/2020: Government Affairs Representatives at United Airlines told a group of employees at a town hall meeting on Thursday that Senators Pat Toomey (R-PA) and Rick Scott (R-FL) have blocked a unanimous consent motion to advance a clean extension of the Payroll Support Program. This move will delay any progress on the bill for now. The Payroll Support Program is vital to thousands of airline workers who are facing furloughs within one week if funding is not extended by September 30.

The IAM, along with leaders from a coalition of airline unions and airline carriers, today sounded the alarm on Capitol Hill to push Congress to act immediately to pass a clean extension of the Payroll Support Program (PSP). There are only eight days remaining before the PSP expires, and without a clean extension, hundreds of thousands of airline workers face the possibility of being furloughed.

“As the largest airline union in the world, the Machinists Union implores Congress to act now to save the livelihoods of hundreds of thousands of airline workers by passing a clean extension of the airline Payroll Support Program,” said IAM International President Robert Martinez Jr. “We will need the full force of every airline worker to lift our country back up when America is ready to fly again. In the meantime, we can’t abandon the men and women who have so bravely kept our nation moving during this difficult time.”

The IAM last week held a nationwide Airline Day of Action, demanding that Congress act now to pass legislation to stem layoffs. IAM members met with Senators and Senate staff, either virtually or in person, in 32 cities in over 20 states.

“Congress has to stop placing a greater importance on their political standing and start thinking about the livelihoods of aviation’s frontline workers,” said IAM Transportation General Vice President Sito Pantoja. “Bipartisan support has already been expressed, but the clock is ticking. Every day airline workers risk their health to move America. Now, Congress needs to move to protect them.”

Here’s how you can help save airline jobs:

The Paycheck Support Program contained in the CARES Act is set to expire on October 1, 2020. Carriers are making plans on how to deal with its loss, and the outlook doesn’t look good for airline workers.