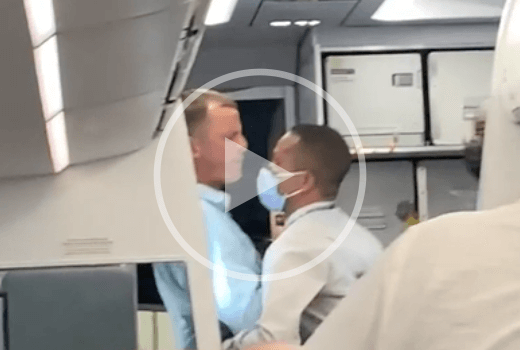 Warning: Adult Language and Content: The tantrum is the latest in a record-shattering number of air-rage incidents that have happened this year. This year, entitled and enraged passengers have been fined more than $1 million, resulting from more than 3,000 serious rage incidents in 2021.

Watch This Couple Scream at JetBlue Crewmembers, Get Thrown Off Flight

Last week, flight crews booted a couple from a JetBlue flight to San Diego during a screaming, drunken tirade over masks. As usual, the event was captured on video and posted online for all to enjoy.

In the video posted on Reddit, a man can be seen screaming and grabbing at a male flight attendant who, he said, did not give him enough warning that his nose needed to go in his mask.  “You gave me one “f-ing warning,” he shrieked in the viral video.  “I pulled it up the second he said something,” he continued. “The second he said something, I pulled it over my nose,” he cried in a high-pitched wail as cellphones recorded.

At one point, Alice Runkevich, who recorded the video, grabs some snacks and turns her attention to a female passenger accompanying the man. As she enters the video, his counterpart is correctly wearing her mask, nose in, but she seems to lose those skills soon after. Stumbling and slurring her speech, she pleads to the other passengers that they tried to follow the Federally-mandated mask rules but just couldn’t satisfy the flight crews.  “We’re being kicked off the flight and we don’t know why,” she explains, adding, “we’re Americans.”

Despite this, they were both removed from the flight before it left Fort Lauderdale, to the delight of onlooking passengers. Flight B6 529 had been delayed for several hours before the incident, which went down while the plane was on the tarmac.

JetBlue said in a statement that the would-be travelers had been asked “multiple times but would not comply with the federal mask mandate.”

“Eventually the customers were asked to leave the aircraft at which time one customer became verbally and physically aggressive toward crewmembers before eventually exiting the aircraft,” the carrier said in a statement to local media outlets. “The customers will not be allowed to fly JetBlue in the future.”

The tantrum is the latest in a record-shattering number of air-rage incidents that have happened this year. This year, entitled and enraged passengers have been fined more than $1 million, resulting from more than 3,000 serious rage incidents in 2021. According to IAMAW District 141 Legislative Director David Roderick, the attacks are not limited to in-flight; they are becoming a problem for gate and ticket counter agents, as well.

“it’s really not just airline workers getting abused this way,” said Roderick. “There have been 85 assaults on uniformed TSA Agents this year, too.” Roderick suggested that increased penalties for those who abuse airline workers and other airport staff may need to be increased to discourage more assaults. “Most of these attacks are provoked by Federal masking rules and alcohol,” he said. “We don’t make Federal masking rules, no airline does. We just have to enforce them – which puts our members in danger too often.”

Roderick is participating in discussions with a coalition of labor unions, including the Chicago Federation of Labor to develop legislative strategies to deal with the rise in air rage incidents. On September 4th, Roderick and representatives from the Airport Labor Committee met with AFL-CIO President Robert Reiter and Vice President Tefere Gebre to discuss the issue. “The main goal was finding ways to get more union members involved in this issue,” Roderick said of the meeting.

In September, the Biden Administration doubled the penalties for not wearing masks at airports and aboard aircraft to between $500 and $1,000. Fines for repeated violations can go as high as $3,000. Disrupting or attempting to intimidate or interfere with a flight crew is now a federal offense that can potentially result in prison time.